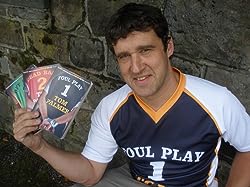 These stories are the result of careful collaboration between the author, Tom Palmer and a large number of young people and adults on both Alderney and Guernsey. To kick off the writing process, Tom visited all of Guernsey’s High Schools and St Anne’s School in Alderney. There he met with groups of Year 7s to discuss possible storylines. From these meetings grew the twelve stories.

These are very much Bailiwick stories. Tom talked to many people during his visits to find out about Guernsey stories, customs and folklore. He toured the island looking for suitable settings. He talked to local sports people to get their insights. He absorbed the essence of living on an island. All of these experiences were then distilled in his writing.

But the resulting stories were only the first draft. There was still much work to be done. Local young people then read the stories and contributed additional ideas for the re-draft. New details were added to intensify the Guernsey and Alderney atmosphere of the writing. Fresh ideas were suggested to add realism to the stories that feature less conventional sports. An illustration workshop was held, organised by local artist, Hugh Rose. Guernsey Sports Commission’s Jeremy Frith read the stories to ensure that they modelled the island’s teaching on Growth Mindset. And finally the text was locally proofread and printed.